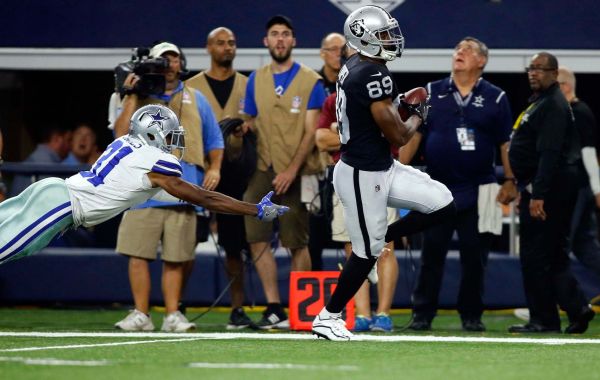 Like many of Raider Nation would assume, there were many positives on offense, however, major concerns still remain on the defensive side of the football.

Here are The JR Report’s 3 takeaways from Week 3 of the Raiders’ preseason.

Oakland quarterback Derek Carr threw for 144 yards and two touchdowns in just under a half of play against a Super Bowl contender. His first half included two magnificent pinpoint strikes to Raiders wide receivers Cordarrelle Patterson and Amari Cooper. His incredible play was honestly sub-par for Carr as he started the game out of sync often over throwing his targets.

The former Bulldog had a nearly flawless game against the Rams adding two more touchdowns and 100 yards passing to his preseason statistics.

It seems that Carr hasn’t lost a step since his fibula injury and looks better than he was in 2016. Oakland offensive coordinator Todd Downing has decided to give Carr even greater control of the offense at the line of scrimmage and it looks like it will pay massive dividends.

The new additions of running back Marshawn Lynch and Jared Cook provide a running back with elite vision and a big tight end target for Carr. Two things he has not had his entire NFL career.

As a result, the recent additions could help Oakland’s offense ascend to the top in the league. Honestly, it isn’t too far-fetched especially with New England Patriots wide receiver Julian Edelman out for the year and the Atlanta Falcons subject to a Super Bowl hangover.

All in all, Carr is one of the best quarterbacks in the league and has shown everyone throughout the preseason why the Raiders missed him so much during Week 17 and the Wild Card playoffs last season.

Related What to do with Raiders CB Sean Smith

Going into the third preseason game, it was paramount to see how the Oakland defense could handle Cowboys running back Ezekiel Elliot and their high-powered offensive line.

It would be Oakland’s first big test for the young linebackers on the ground until the regular season kicks off. To Raider Nation’s surprise, the Raiders linebackers held Elliot to just 18 yards on six carries.

It is possible the story would have been different if the teams played a full game. Maybe Elliot would have worn down the Oakland defense and broken a few runs late, but the Raiders held him in check during the short opportunity.

It is still the preseason, so everything will be taken with a grain of salt. Nonetheless, the Oakland defense showed that they could and have the potential to stop the run. They just need to figure out how to communicate and fill gaps on a consistent basis.

Remember, the Raiders defense was trending in the right direction before Carr got hurt. If they keep that trend the same, then the Oakland defense will be a completely different story in 2017.

Related Crimson Tide vs. Seminoles: CFB opener of the century

While it was good to see the Raiders stop the run with their first team, they still struggled mightily to cover the tight end and stop Cowboys quarterback Dak Prescott.

Prescott looked almost unstoppable at times going 11/14 for 113 yards and one touchdown. Moreover, Cowboys tight end Jason Witten had six catches for 74 yards and one score, all in less than a half of play.

Every season Oakland is letting tight ends slip down the seam for big gains. It was no different last night and will not be any different this season unless Raiders safety Obi Melifonwu has a splendid rookie season. He looked good in his limited time on Saturday, but a preseason game is much different from any live regular season action.

Also, it is hard to forget the Oakland defense made Los Angeles Rams quarterback Jared Goff look like an All-Pro, which is hard to do, for the former Cal Bear threw for 160 yards and one touchdown against the Raiders in limited time.

If both rookies can’t stay healthy, Oakland’s pass defense could be worrisome, especially against tight ends.

Ryan Lipton is the founder of The JR Report. For more news and The JR Report updates follow him on twitter @rytime98.