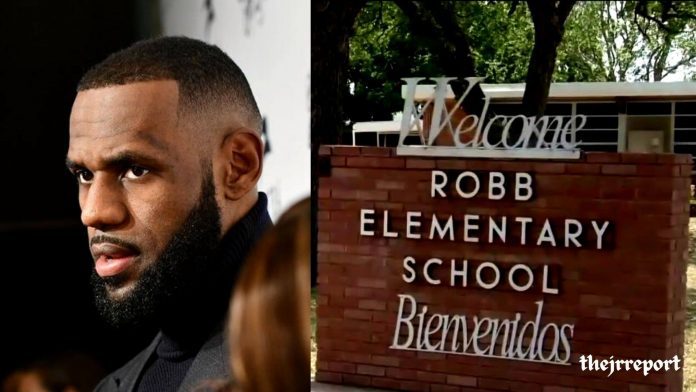 LeBron James was one of several in the sports world who was angry on Tuesday afternoon following a horrifying mass shooting at a Texas elementary school. The Los Angeles Lakers star exploded on social media demanding change after at least 18 schoolchildren, and three adults were slain in Uvalde, Texas.

LeBron James, And His Teammates Responding To The Tragic School Shooting In Texas!!

LeBron James is a well-known name in professional basketball in the United States. He had a challenging upbringing, yet he showed an enormous amount of skill even at a young age. Mary High School played a crucial role in guiding his team to back-to-back titles as state champions in Division III.

In addition to his prowess on the football field, where he to the all-state team, he started garnering national notice for his ability as a basketball player. In the National Basketball Association draft, the Cleveland Cavaliers selected him with the first overall choice.

The Texas Department of Public Safety has verified to The Texas Tribune that at least 18 children and three adults were slain on Tuesday at an elementary school in Uvalde.

According to Governor Greg Abbott, the suspect, a high school student in the town who was 18 years old, was found dead after the shooting. He also shot his grandmother before arriving at the school, which was scheduled to have its last day of classes for the year later this week.

See also  The dollar starts with a peso value on Monday

Uvalde is around 90 minutes to the west of San Antonio, and it is approximately midway between San Antonio and Del Rio, which is on the border.

In recent days, this shooting is simply the most recent incident of its sort to take place in the United States. Earlier this month, there was a shooting at a grocery store in Buffalo, resulting in the deaths of ten individuals.

According to the Gun Violence Archive, there have been 15 further mass shootings around the nation after that incident on May 14. These shootings took place in various locations, which works up to 1.5 times every day on average.

James wasn’t even close to being the only one who shared his fury. During the pregame press conference for Game 4 of the Western Conference finals, which took place on Tuesday night in Dallas, the head coach of the Golden State Warriors, Steve Kerr, went on a passionate and furious tirade.

Natasha Cloud, a great player for the Washington Mystics, was the only one who commented on the game after it ended on Tuesday versus the Atlanta Dream.

In the early hours of Tuesday morning, the world learned of the horrific shooting at a Texas elementary school by an 18-year-old male.

According to the Associated Press, at least 19 pupils and two adults were slain on Tuesday, May 24. The news of the 18-year-old student opening fire on the school sparked outrage throughout the global world of sports.

See also  When Is The Release Date Of The Rising Of The Shield Hero Episode 2?