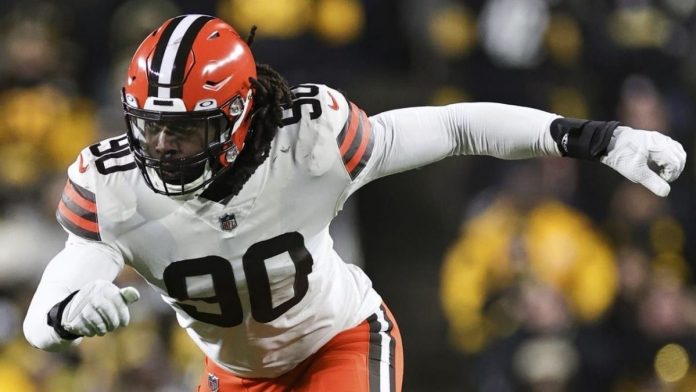 The pro ball pass rusher Jadeveon Clowney has re-signed with the Browns and now he is running back in Cleveland for the year 2022.

Browns Renew $11 Million Deal With Jadeveon Clowney For One Year

Since June last year, Jadeveon Clowney hasn’t been a part of any club for NFL. Now Clowney has the pleasure of Cleveland Brown’s head coach Kevin Stefanski has finally agreed on the deal that he will return to Cleveland for 2022.

Jadeveon Clowney finally made up for the decision after taking his time to decide what is good for his future. Clowney is now all set to sign the one-year deal of a total of $11 Million with the Cleveland Browns.

Clowney has reportedly turned down offers that reached up to $ 15 Million to sign up with the Cleveland Browns. Now he is expected to stay with the Browns for some coming years.

In his final seasons with the Houston Texans, Jadeveon Clowney has ranked 9 sacks in 14 starts. As a member of the Tennessee Titans, he delivered no sacks in the year 2020 which somewhere made an impact on his sports career.

After leaving the Texans he had to struggle a lot to re-establishing himself as the top rusher for the league.

Now as he is back with the Browns he will be reuniting with the Quarterback Deshaun Watson with whom he previously played in the Texans club for about 2 years.

It is going to be super interesting for their fans to see their performance in the team in the future.

Clowney’s decision to return to the browns is being considered quite a good decision as the rusher was suffering from some injuries which slowed down his performance.

The Browns are very professional, they know how to utilize Clowney’s strength and when to give him proper rest to ensure he is in good health.

Born on Valentine’s Day in the year 1993 Jadeveon has immense love for the football game which has made him one of the best players on the defensive end. His first team was All American Honors in his college in southern California.

He began his NFL career with Houston Texas back in the year 2014. He had been a member of the Texans for five seasons and for consecutive 3 seasons he has earned 3 pro-bowl selections.

He later on departed with the Houston’s and played for one season each with the Seattle Seahawks, Tennessee Titans, and Cleveland Browns.

The 6.5 feet tall optimistic and cautiously confident sportsman is now all set to prove his capability for one more time with the Cleveland Browns.

See also  Are Chloe Bailey And Halle Together? Age Net Worth, Career, Boyfriend Of Chloe Bailey