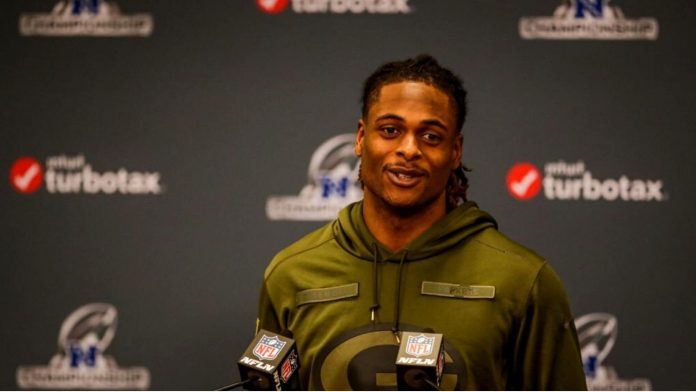 Davante Adams, a wide receiver with the Las Vegas Raiders, made it plain that money had no bearing on his choice to join his new team.

Packers Offer Davante Adams A Bigger Contract Than The Raiders!

Davante Lavell Adams is an American football wide receiver with the National Football League’s Las Vegas Raiders (NFL). He attended Fresno State University and was drafted in the second round of the 2014 NFL Draft by the Green Bay Packers.

Davante Adams, an All-Pro wide receiver, ultimately selected the Las Vegas Raiders over the Green Bay Packers. The five-time Pro Bowler told reporters this summer that the Packers offered him more money than the Raiders, with whom he inked a five-year, $141.25 million deal extension after being moved. At the time of his signing, he was the highest-paid wide receiver in the NFL.

After the Packers traded Adams for a first-round selection pick and a second-round draught pick in March, claims circulated that Green Bay was prepared to pay Adams as much as – if not more than – Las Vegas. In a news conference on Thursday, Adams verified the reports.

“However, there’s a lot more to it. For me, family is a significant part of it. Being here geographically makes it much easier for me to be in touch with my family all year.” he explained.

“I had a decision, and it was to come here and raise my family on the West Coast or to come out here and have some fun in the sun,” he concluded.

Adams, who has 73 receiving touchdowns in his career, is leaving four-time MVP and 38-year-old quarterback Aaron Rodgers to rejoin Derek Carr, Adams’ QB at Fresno State.

During his news conference, Adams remarked, “[Rodgers and I] talked throughout the entire process. We spoke about his future, exactly like he stated the other day, and what he believes his time in Green Bay, or just football in general, would be like.”

“And that factored into my choice as well, given where I am in my career – and this isn’t a dig at any of Green Bay’s previous quarterbacks. Jordan Love is one of my favorites; he’s a nice guy. But I’d like to leave an indelible mark on the world and be remembered for it,” he explained.

“And it just wasn’t a position in my career where I was ready to risk Aaron leaving after a year or two. So I made the decision to come here, and he appreciated and accepted it,” he stated.