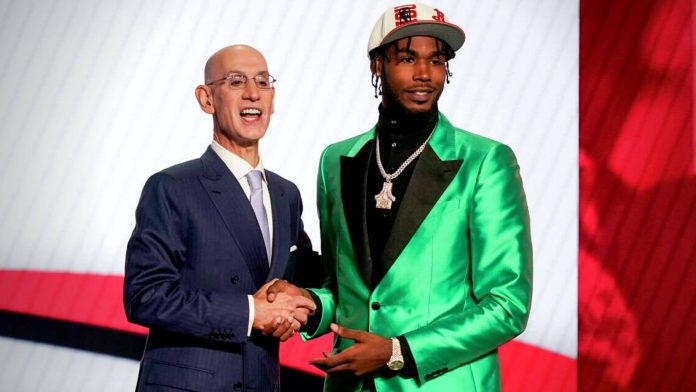 Tari Eason, a star basketball player for LSU, was selected by the Houston Rockets with the 17th overall pick in the 2022 NBA Draft.

Houston Rockets Selects Tari Eason In The First Round Of NBA Draft!

The 6-foot-8 big Eason began his collegiate basketball career at Cincinnati before moving to LSU. Rafael Stone, the general manager of the Rockets, has strong connections to Seattle, where he finished high school. Seattle native and Rockets point man Kevin Porter Jr.

Eason was selected by the Houston Rockets at number 17 in the first round, making him the 17th player in LSU history to be chosen in that position. This is the second year in a row that LSU has had a first-round pick.

For the Tigers, Eason scored in the double digits in 29 games, with 11 games scoring 20 points or more and seven double-doubles. He finished sixth in the SEC in scoring, ninth in rebounds, fourth in steals, and ninth in offensive rebound average. He was a semifinalist for the Naismith Defensive Player of the Year award (2.27).

After transferring from Cincinnati, where he had played as a freshman, Eason had a breakthrough 2021–22 season at LSU. Eason averaged 16.9 points, 6.6 rebounds, 1.0 assists, 1.1 blocks, and 1.9 steals per game while being named to the first-team All-SEC and the AP Honorable Mention All-America.

Eason is a strong, versatile player for the Rockets. In his one season with the Tigers, he established himself as a defensive threat and all-around player. During his second season in Baton Rouge, he averaged 16.9 points and 6.6 rebounds off of the bench, winning the SEC Sixth Man of the Year honors.

Eason developed into one of the best players in the SEC and was a semifinalist for the National Defensive Player of the Year while also sustaining that same degree of success offensively.

The Cincinnati move made a quick impression on the Tigers, perfectly fitting into his role as a sub. Eason’s name eventually appeared off the board in the first round of Thursday’s selection as NBA interest in him increased along with his output.

Eason is the 18th first-round selection in Tiger history, joining a rich list of LSU basketball players who have played in the NBA. According to Adrian Wojnarowski of ESPN, “Houston has deemed Eason the greatest defender in the draft, captivated by his ability to shift and attack with ferocity.” The Rockets got their man.

Tari Eason And Other Drafts

On Thursday night, the Rockets selected Eason along with third-round pick Jabari Smith. Smith, who took over as Auburn’s starting quarterback last year, will provide some SEC grit alongside Eason on a young Houston team.

Houston’s defense was the worst in the league last season, so the addition of two of the longest, most versatile, athletic, and skillful defenders in the draft should have a positive effect

A team that had a weakness in size and defense now has the chance to turn it into an advantage because of the versatility of Eason and Smith.

The Rockets have had a great draft so far, and there is still one pick left.