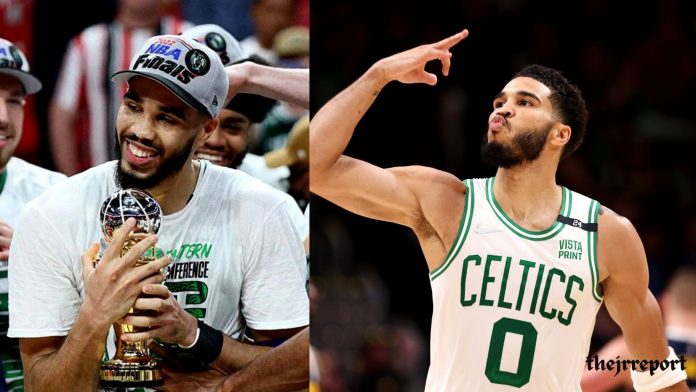 After helping the Boston Celtics beat the Miami Heat and reach their first NBA Finals since 2010, Jayson Tatum has received the first Larry Bird Eastern Conference Finals MVP award. Thanks to Jayson Tatum’s series-high 25 points, 5.6 assists, and 8.3 rebounds per game, the Celtics won the series.

In Only His 24th Year, Jayson Tatum Is The First Winner Of The Larry Bird Award!!

Many people doubted the Celtics’ playoff prospects after they were eliminated in the first round of last year’s playoffs and started this season with a record of 23-24. Ime Udoka, a first-year coach, publicly chastised his players. They were also critical of each other. However, it wasn’t until the last several months that Boston took off.

While his scoring prowess has never wavered, he has developed into one of the NBA’s top playmakers and perimeter defenders. First-team All-NBA forward because of his performances in the league.

At The Age Of 24, Jayson Tatum Became The Inaugural Recipient Of The Larry Bird Award!!

Since 2010 when Jayson Tatum was 12, the Boston Celtics have qualified for NBA Finals, ending a 12-year run of not making it there. With his performance on Sunday, he became just the first Larry Bird award winner ever and an integral part of the historic team’s return to the Larry O’Brien Trophy series.

A new trophy for the Eastern and Western Conference Final Most Valuable Players will be presented in honor of one of Boston’s greatest icons, legendary Larry Bird, in this year’s NBA 75th season of unprecedented significance.

Boston’s Celtics, with their rich history and record of titles, need a player like Tatum to help them relive their glory days. Tatum even became the second-youngest player in playoffs history (at the age of 24) to reach the 1,500-point plateau during this game.

Despite Tatum’s long-range shooting prowess, his offensive and defensive prowess make him a worthy successor to Bird’s legacy.

Even though Kobe Bryant led the Los Angeles Lakers to a seven-game triumph against the Boston Celtics in the 2010 NBA Finals, Tatum did not hesitate to declare his respect for “Black Mamba,” who is his boyhood hero.

The Golden State Warriors, who won the Western Conference title by defeating the Dallas Mavericks in five games, will meet Tatum and the Celtics in the NBA Finals to overtake the Lakers as the team with the most NBA titles.

The inaugural recipient of the Magic Johnson trophy in the Western Conference was Stephen Curry, the series Most Valuable Player.

The playoffs will be his time to shine, however. A 46-point performance in Game 6 of the second round against Milwaukee’s Giannis Antetokounmpo saved Boston’s season in the first round against Kevin Durant. Now that Tatum has helped the Celtics defeat Miami with a 26-point Game 7, he will finally play in the NBA Finals after two prior failures in the Eastern Conference finals.