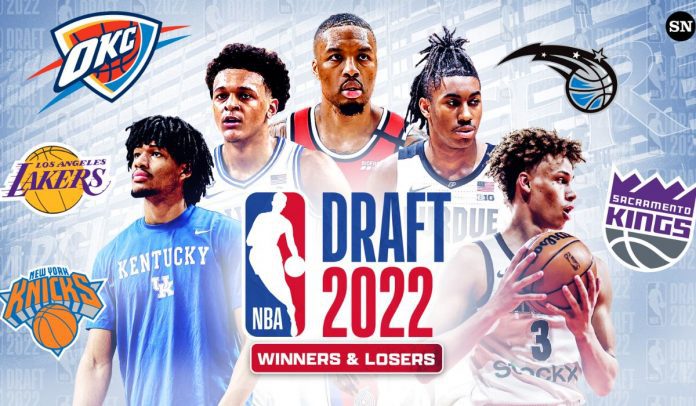 Although the Draft got off to a big surprise, the picks themselves provided the most of the fireworks as the trade market dried up. Here are the winners and losers from the Draft night.

So much for those mock Drafts, I suppose. After weeks and weeks of stories that Jabari Smith Jr. was the undisputed #1 pick, everybody outside the Magic war room was shocked when Orlando selected Paolo Banchero as their first choice.

The 2022 NBA Draft’s Winners And Losers!

There were more aftershocks that followed. Who emerged victorious? With a new installment of NBA Draft Winners and Losers, our NBA crew goes over all the major developments of the evening.

Winner: Paolo Banchero And His Bettors

It goes without saying that the media and their insider sources in the league were perplexed when the betting markets changed dramatically starting just over 24 hours before the selection and money began pouring in on Paolo Banchero going first overall.

A little over 12 hours before the selection, Adrian Wojnarowski even tweeted a clear prediction that Jabari Smith would be selected first overall, followed by Chet Holmgren and Banchero.

The sharps were on to something, it turns out. Wojnarowski and other news outlets started to change their tune an hour or so before the Draft. It was obvious that the Magic would take Banchero by the time Adam Silver announced that they were running out of time. Some shrewd bettors profited greatly.

Detroit, in my opinion, had the finest drafting night of any team and was the big winner.

Jaden Ivey falling to them at No. 5 was part of the luck involved. Ivey and Cade Cunningham, a backcourt that has the potential to be the greatest in the NBA in a few years because of their explosive athleticism, are a fantastic one-two punch.

Then they made a deal for Memphis native Jalen Duren, who is the center of the future. (Does this decrease their likelihood of pursuing Deandre Ayton on the free-agent market?)

One should keep an eye on the Pistons.

Despite being uninteresting, New York didn’t do anything particularly wrong. The Knicks resumed their patience-based approach under Leon Rose and freed up some cap space by trading for Kemba Walker.

But Knicks supporters never want to be patient. They wanted their team to make a big move, such as trading down and selecting Jaden Ivey, keeping the No. 13 pick acquired in the initial trade, and selecting Jalen Duren (now a Piston), the future’s face of the team. Instead, they gained some additional cap space to pursue Jalen Brunson, who will almost surely remain with the Mavericks anyhow.

With signings in free agency, the Knicks can please their supporters.

Paolo Banchero would be a wonderful match next to Jalen Green in Houston, as he would be elsewhere, but Jabari Smith would have been a superior choice.

Although Green and Kevin Porter Jr. already do so for the Rockets, Smith doesn’t generate opportunities for himself as well as Banchero does. The Rockets need someone who can shoot the ball well and defend his position, and Smith fits that bill. Smith will excel in his position in Houston, which will benefit the Rockets.

They ended the evening with lottery picks, one of which required a trade. These picks could or should be an important component of the core being formed in OKC.

Even after the Magic selected Banchero, the Thunder continued to pursue the Gonzaga center. They also traded with the Knicks to acquire Ousmane Dieng, and they used their own pick to select Jalen Williams after receiving the potential franchise cornerstone, Chet Holmgren, at No. 2. (not to be confused with Jaylin Williams, who they got in the second round). You can see the sort of team Sam Presti is beginning to assemble even though all of these guys are thought to need some time to grow.