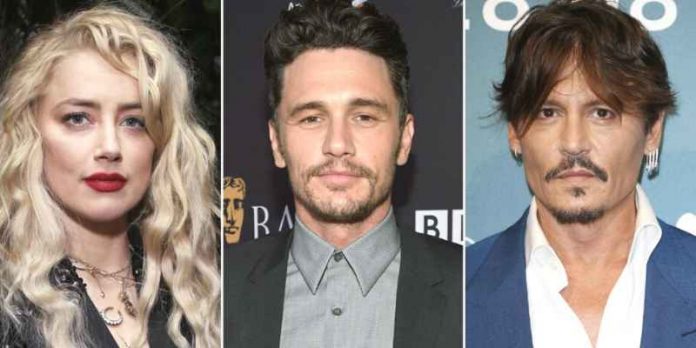 Even a single event in Hollywood has the potential to get converted into a whole set of controversy, which can become a headline anytime soon. Something similar happened in the high-profile divorce case between Johnny Depp and Amber. After Amber charged her husband with domestic violence, Johnny left no stone unturned to regain his reputation by filing a defamation case.

The allegation of domestic violence had impacted his Goodwill and reputation in the Hollywood industry to a great extent. The proceedings concerning the same are continuing before the court of law. But every day, something new is being discovered out of this particular case law and hence is becoming a sensational headline.

Why Did James Franco Visit The Penthouse?

In one of the recent disclosures, it had come forward that the surveillance footage shows after James Franco visited Amber at her apartment the night before she filed for divorce. It has added a new dimension to the entire case.

The opposing attorney showed a video of midnight around which the famous actor James was entering Ms. Heard’s Penthouse apartment in Los Angeles. All of this happened a night before the divorce case was filed.

The introduction of James Franco in this entire case is important because James Franco entered the apartment on 22nd May 2016. According to her allegation of Amber Heard, this was exactly the date on which she became the victim of domestic violence. The fact that a third party was also present on the premises could confirm or negate all these charges. In such a situation, a new dimension could be added to the entire case, resulting in the on-the-spot acquittal of Johnny.

See also  The New York Rangers Have Made An Extra Offseason Move!

This particular evidence was introduced during the cross-examination. The Attorney representing Amber tried his level best to avoid the admission of this evidence before the court of law because he knew that this would weaken the case.

In such a situation, it becomes important to mention that this particular kind of evidence would mandate the presence of the famous actor James in the court of law so that he can bring the facts before the court of law. This is likely to be extremely helpful in bringing the case towards an ultimate conclusion.

There is a huge expectation that James Franco would be only disclosing the truth. It is because even he needs to maintain his reputation and Goodwill. If he tries to tamper with the evidence, it becomes quite obvious that his Goodwill would be affected to the next level. In such a situation, it has to be concluded that this is the best type of perspective that has been introduced over the period. This is going to result in the ultimate discovery of the truth.

Johnny is extremely happy and relieved because the chances of his reputation being restored and damages being awarded have increased significantly.

This is the best type of perspective introduced and will likely benefit both parties. This is going to help out all the people to a great extent.