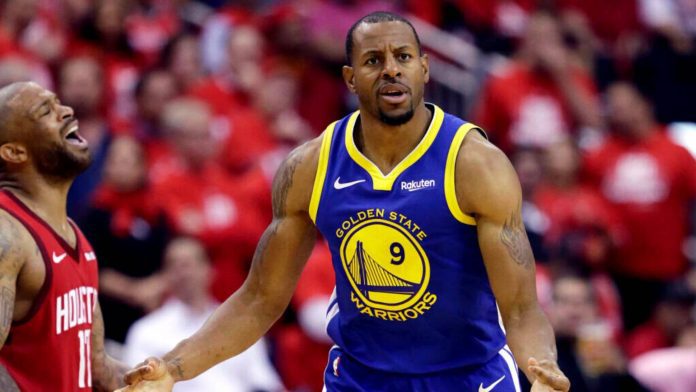 The Golden State Warriors are waiting on the condition of three key injured rotation players for Game 1 of the highly anticipated NBA Finals.

Gary Payton II, Andre Iguodala, and Otto Porter Jr. have all lost time due to injury during Golden State’s postseason run. The trio of players is classified as doubtful on the injury report for Game 1 of the NBA Finals on Thursday, after exercising on Tuesday and Wednesday.

Andre Iguodala has been labeled as doubtful for Game 1 of the NBA Finals between the Boston Celtics and the Golden State Warriors on Thursday night.

The Golden State Warriors face the Boston Celtics in Game 1 of the NBA Finals on Thursday night at the Chase Center in San Francisco, California, and Andre Iguodala may be available.

The 2015 NBA Finals MVP hasn’t played since the first round of the playoffs against the Memphis Grizzlies, but he’s classified as doubtful for Thursday’s Game 1 of the NBA Finals.

His neck injury is what he’s been battling.

The Warriors have advanced to the NBA Finals six times in the previous eight seasons.

The Warriors have advanced to the NBA Finals six times in the previous eight seasons.

They had made the NBA Finals five times in a row and won three NBA Championships before missing the playoffs for two consecutive seasons.

As a result, they have a lot more experience than the Celtics, who are making their first trip to the NBA Finals (as a franchise) since 2010.

Furthermore, Iguodala only appeared in 31 regular-season games and hasn’t been in a playoff game since Game 4 of the first-round series against the Denver Nuggets. Due to a left cervical disc injury in his neck, Iguodala has lost time in the playoffs.

Payton II was a major part of Golden State’s postseason success until he was injured in Game 2 of the second round against the Memphis Grizzlies. Payton II started back-to-back games for the Warriors in the playoffs, averaging 6.1 points in 15.8 minutes per game.

With left foot pain, Porter Jr. was ruled out of Game 4 and Game 5 of the Western Conference playoffs against the Dallas Mavericks. Porter Jr. was averaging 5.5 points in 20.7 minutes per game prior to his injury.

If all three players are available for Game 1, Steve Kerr’s rotation for the finals will have to be imaginative. The Warriors’ bench depth will be much improved now that all three seasoned players are back in the lineup.

About Andre Iguodala:
Andre Tyler Iguodala is a professional basketball player in the National Basketball Association for the Golden State Warriors (NBA).

With the Warriors, he won three NBA titles and was voted the NBA Finals Most Valuable Player (MVP) in 2015.

He also represented the United States in the 2010 FIBA World Championship and the 2012 Summer Olympics, winning gold medals in both events.

See also  Hornets Intend To Hire Kenny Atkinson As Their Next Head Coach!

Iguodala was moved to the Miami Heat on February 6, 2020, in a three-team transaction involving Memphis and Minnesota that included Jae Crowder and Solomon Hill. He committed to a two-year, $30 million agreement with Miami as part of the trade, with the final year being a team option.

The Heat advanced to the NBA Finals in 2020, where they were defeated 4–2 by the Los Angeles Lakers, and Iguodala became the ninth player in NBA history to reach six consecutive Finals.

The Heat did not activate their $15 million option on Iguodala’s contract for the 2021–22 season after the 2020–21 season, making him a free agent.

Iguodala returned to the Golden State Warriors on Aug. 10, 2021. From January through April, he missed 31 games due to back pain.