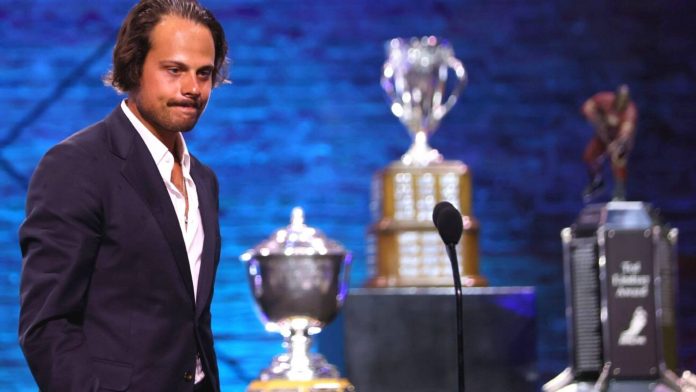 The Ted Lindsay Award is distinctive in that it is the only honor decided by the players themselves, continuing a custom started with the Lester B.

Pearson Award in 1970–1971 The player that they believe is the best in the NHL regular season is chosen by the NHLPA members each year.

The Ted Lindsay Award, reinstituted in 2009–10 in Ted Lindsay’s honor, pays tribute to the late forward’s legacy as a Hall of Famer noted for his brilliance, determination, leadership, and his part in founding the original Players’ Association.

The most-ever recipient of the award was Wayne Gretzky, who received it five times in his playing career.

The Pittsburgh Penguins have had the most winners as a team with ten, more than any other group. With eight, the Edmonton Oilers are in second place.

June 21, 2022, Toronto – The 2021-22 Ted Lindsay Award winner has been chosen by the players, according to a statement released by the National Hockey League Players’ Association today.

Auston Matthews who plays for the Toronto Maple Leafs has been voted as the winner. According to votes from other NHLPA members, the TLA is given “to the most outstanding player in the NHL.” The award has now been given out for 51 seasons.

During the 2022 NHL Awards tonight, the 2021–2022 TLA winner was revealed. The two players left standing for the 2021–22 TLA were Edmonton Oilers forward Connor McDavid and Nashville Predators defense Roman Josi.

Matthews becomes the first member of the Maple Leafs and the second American-born player (after Patrick Kane, 2015–16) to win the TLA after finishing as a finalist in the previous season.

The Maple Leafs finished second in the Atlantic Division with a franchise-best 115 points thanks in large part to Matthews, who participated in 73 of Toronto’s 82 regular-season games.

He set a Maple Leafs franchise record with 60 goals, winning the Maurice “Rocket” Richard Trophy for the second time in a row.

Matthews’ development into one of the best two-way forwards in the NHL unquestionably propelled him to the top of his peers’ ballots as well.

It’s one thing to score a tonne of goals. But Matthews accomplished it without ever using offensive deception, giving a club that was in need of defensive help value that was close to elite. People who encounter him across the league now recognize him.

Hart Trophy was received by Auston Matthews of the Toronto Maple Leafs. The Norris Trophy was bagged by Cale Makar of the Colorado Avalanche.

Hockey is a game of pride and prestige that will be rewarded for sure at one point in the season. But for now, we wish the player all the best for the rest of the season!

The Lightning Rely On Championship Mettle For Game 3 Win!