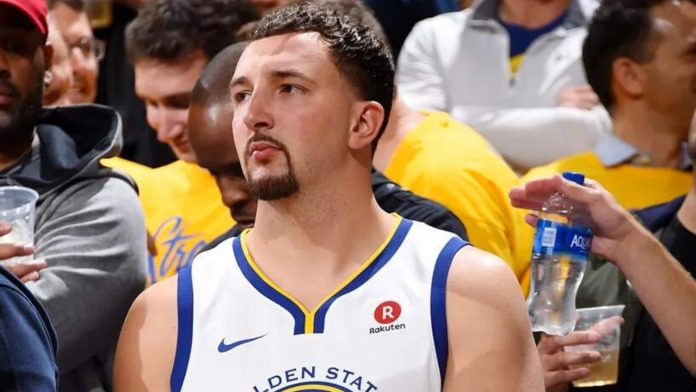 The 2022 NBA Finals is the championship series of the National Basketball Association (NBA) for the 2021–22 season, as well as the season’s playoffs finale.

The Golden State Warriors, San Francisco-based professional basketball club beat the Boston Celtics in Game 5 to take a 3-2 lead in the NBA Finals, but one noteworthy fan was not in attendance.

After penetrating many levels of security at Chase Center and ending up warming up on the floor before Game 5, Youtuber “BigDawsTV,” aka Dawson Gurley, whose claim to fame is a hazy resemblance to Klay Thompson, was taken from the venue.

The content creator posted a video on YouTube detailing his journey into the Chase Center, including how he got past security and onto the floor.

The video opens with a cameraman in the toe and a phony Klay Thompson arriving at Chase Center in Warrior’s warm-ups and getting through security, seemingly unaffected.

He ultimately made it to the court and began shooting after slipping past five levels of protection. Security ultimately escorted him out of the premises, and she was rather amusing as she led the content creator out.

Outside the venue, Fake Klay maintained the character with fans and television crews. Warriors security staff remind Gurley throughout the video that he is being observed by Golden State employees.

Gurley is eventually sent a letter from the Chase Center’s vice president of security, who is referenced in the video, indicating a lifelong ban from the facility.

Despite his repeated claims that he was only seeking the Warriors’ team store, the prohibition appears to be in place, and the Warriors’ official threatens him with trespassing penalties.

Daws also inquires for a refund for his $10,000 tickets, to which the official responds with a resounding no.

Who Is Klay Thompson?

Klay Alexander Thompson is a professional basketball player for the Golden State Warriors of the National Basketball Association (NBA).

Who Is fake Klay Thompson?

Dawson Gurley, commonly known as Big Daws, is an American YouTube celebrity who is best known for the channel Big Daws TV, which features pranks, and the channel BigDawsVlogs, which has vlogs.

Dawson Gurley has been with the Warriors for quite some time. He first appeared in 2017, just as the Warriors’ dynasty was at its pinnacle.

Impersonating celebrities looks to be developing into a small subculture. Maybe you’ve heard of “Fake Drake”? He’s now scheduling nightclub appearances since the situation has gotten out of hand.

Gurley has stated several times that it is security’s fault for allowing him to be on the floor.

This isn’t the first time an NBA fan has made their way onto the court. The Pelicans took comedian Tony Roberts off the court in 2018 when he was conducting a shoot-around with the team, despite his high level of performance.

It’s unclear what will happen to Gurley next. However, he hasn’t been barred from accessing any of the other 29 arenas.