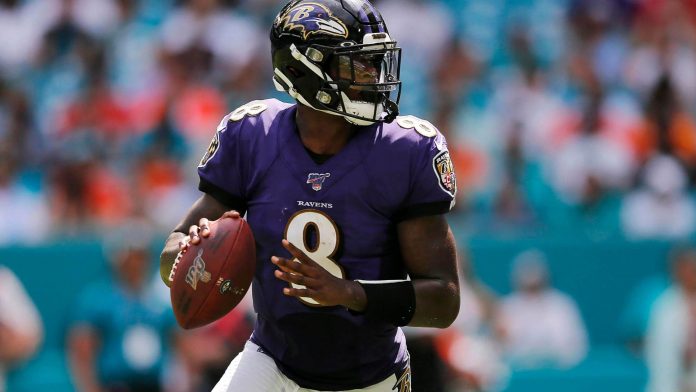 Griffin was plagued by further injuries and uneven performances in 2015, and he lost his starting job to Kirk Cousins, which resulted in his release by Washington following the season.

Griffin signed with the Cleveland Browns the next year, but injuries marred his time with the team, and he was released at the end of the season. He joined the Baltimore Ravens in 2018 after spending 2017 as a free agent, where he played three seasons as a backup quarterback.

Lamar Demeatrice Jackson Jr. is an American football quarterback for the Baltimore Ravens (NFL) of the National Football League. He was drafted by the Ravens as the last first-round choice in the 2018 NFL Draft after playing college football at Louisville, where he won the Heisman Trophy his sophomore year.

After an injury to incumbent Joe Flacco, Jackson took over as the Ravens’ starting quarterback in his first season and led the club to a division title, becoming the NFL’s youngest quarterback to start a playoff game at the age of 21.

The next season, Jackson established a season record for quarterback running yards and led the league in touchdown passes while leading the Ravens to the AFC’s top seed (AFC).

He became the second unanimous Most Valuable Player (MVP) and the fourth African-American quarterback to earn the award as a result of his accomplishments.

Jackson followed up his MVP season by becoming the only quarterback in NFL history to have successive 1,000-yard running seasons and leading the Ravens to their third straight playoff appearance.

Over the last few weeks, there has been a lot of speculation surrounding Lamar Jackson’s future with the Baltimore Ravens. This is due to the fact that he is in the final year of his rookie deal.

There have also been some debates on whether or not Jackson’s playing style needs to be tweaked.

Robert Griffin III expressed his opinion on the subject on Tuesday morning. Let’s just say Griffin doesn’t think Jackson should make any changes to his game.

Griffin tweeted, “Don’t suggest to Lamar that he needs to change your style of play.” When he runs, Lamar does an excellent job of avoiding huge hits, and when he is protected, he is devastating from the pocket.”

Griffin is well aware of Jackson’s dominance. For a few years in Baltimore, they were teammates.

With the exception of an ankle ailment last season, Jackson has been in perfect health. It’s a little early to speak about him needing to change his game.